The brisk wind coming off the Bay was enough to blow off hats and knock down the unwary walker. But 37 adults and 3 children braved that wind and the chilly temperature to clean up Wellfleet beaches.

They had been invited by the Wellfleet Conservation Trust to meet at the Wellfleet Mayo Beach parking area on Kendrick Avenue at 10 AM on Columbus Day. The volunteers mostly hailed from Wellfleet and other towns on Cape Cod, but some were from western Massachusetts, Washington DC, California, and other places.

They broke up into 11 teams, each assigned to a different area of beach around Wellfleet Bay. After a couple of hours of cleanup, they had collectively traversed 7 miles of beach and accumulated 25 bags of debris weighing 197 pounds.
Some items were too large for the bags, such as a rusting iron hanger for plants. The volunteers also identified, but did not retrieve, 3 dead gulls, 3 dead eiders, and shellfishing gear that was too heavy to carry.

The cleanup was held during Wellfleet Ocean Week, with events at the Library, at Oysterfest, and other venues. Co-sponsors of the events included the Wellfleet Recycling Committee, Mass Audubon’s Wellfleet Bay Wildlife Sanctuary, the Wellfleet Conservation Commission, the Open Space Committee, and the Friends of the Herring River.

Ocean Week introduced the founders of the 5 Gyres Institute, who helped bring the world’s attention to the problem of ocean pollution, especially microbeads. These are tiny beads of plastic that are put into toothpastes, facial scrubs, and other products at a rate of 8 billion per day. Beginning in 2010, 5 Gyres began research in all five subtropical gyres, as well as the great lakes and Antarctica. Their study on plastic microbeads pollution in the Great Lakes led to the federal ban on microbeads, signed into law by President Obama in 2015.

A report on the Wellfleet Bay cleanup was sent to the Massachusetts Office of Coastal Zone Management (CZM), which coordinates Coast Sweep, the Massachusetts cleanup. That effort in turn is part of the annual Fall, International Coastal Cleanup of the Ocean Conservancy, which collects debris from beaches, marshes, river banks and the seafloor.

More than 18 million pounds of trash were collected by nearly 800,000 volunteers last year. The debris includes cigarette butts, plastic beverage bottles, food wrappers, bottle caps, straws, and such, but also more exotic items such as toilets, refrigerators, boat anchors, and mattresses. This is about 0.1% of what’s added each year to the oceans. Data on the marine debris can be used to seek solutions for keeping trash out of the ocean. 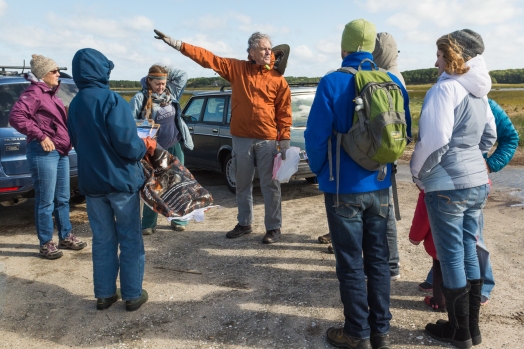 Setting out on Lt. Island; photo by Kim Novino 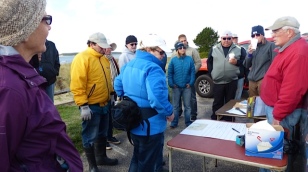 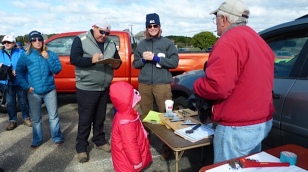 Coast Sweep doesn’t pretend to mitigate the pollution of the world’s oceans and other waterways, although it does help to make specific beaches on lakes, rivers, and oceans safer and more pleasant. That was certainly the case for the Columbus Day work around Wellfleet Bay. Our hope is that the cleanup heightens awareness of what we collectively do to the environment we love.