It was a perfect day for exploring the most northeasterly corner of Wellfleet, and that is exactly what 100 stalwart walkers set out to do on September 9th for the Eleventh Annual Guided Walk by the Wellfleet Conservation Trust. At 9 o’clock, WCT President Dennis O’Connell welcomed the crowd gathered at Gull Pond Landing, and Bill Iacuessa introduced the route which would include two antique homes, a mid-century modern house and studio, viewing of four ponds, the site of the first schoolhouse in Wellfleet and a number of uphill climbs on the sand roads.

Engineer Chet Lay, newly retired from his long career at Slade Engineering, presented information on William Rawlins, former owner of much of the land we were about to see. Early in the twentieth century, Rawlins bought up old woodlots in the area with a goal of preserving the woods and ponds.  Had he lived to see the creation of the Cape Cod National Seashore, he would have seen his vision fulfilled.  He also was responsible for installing the marker at the site of the first schoolhouse.  His initials “W.R.” appear on that plaque.

We set off, surging or trudging up Old School House Hill Road towards the sluiceway between Gull and Higgins Ponds. The route veered onto Steele Road.  Just before the sluiceway we were met by Pat and Randy Bartlett at their home on Gull Pond.  Pat gave the history of the lovely home built by the Higgins family in 1770.  She displayed an old photo of the full Cape cottage, situated on a knoll facing the pond.  She inherited the house through her mother’s line of ancestors.  In response to a question about the location of the outhouse, Pat explained that her family had installed works of art in it and called it the “Art House.”  Today’s house with all modern amenities serves as the Gull Cottage Bed & Breakfast as well as the Bartlett’s year-round home.  Pat says she continues a family tradition of a morning swim every day as much as possible.

While still gathered around for more background information, we heard geologist John Portnoy’s lucid explanation of the Cape’s  pond and land formation by the glaciers.  We then returned to School House Hill Rd., stopping at Patience Brook that connects Higgins Pond to Herring Pond.  There Herring Warden, Dr. Ethan Estey, discussed the herring count and some of the other denizens of the Herring River such as the snapping turtles who lurk in the culverts and the eel population.

The group stopped again to visit the outside of Nora and Sideo Fromboluti’s modern style home designed by Charlie Zehnder. We walked through the courtyard and looked into the house interior through the glass wall on the Gull Pond side. A second free standing art studio for this family of artists lay beyond their residence.

We proceeded to a small parking area at the intersection of Old School House Hill Rd. and Black Pond Rd. and walked to an approximate borderline to get a better look at Slough Pond in Truro. Bill Iacuessa gave an explanation of the terrible name for such a beautiful pond and Horseleech Pond beyond it.  The folks in Truro renamed the ponds, formerly Newcomb’s and Long, to dissuade tourists from disturbing their pristine state.   The locations for the Breuer, Chermayeff and Phillips mid-century modern homes were noted, but they are all on private grounds and not a part of the tour.

The walk turned back westerly along Black Pond Road, providing another full view of Herring Pond and a roof top look at the Saarinen modern home. Designed by Olav Hammarstom, the structure is nestled into the banking below the road at pond level.  At the junction of Old King’s Highway, walkers headed up the hill towards Truro on that road to the site of Wellfleet’s first schoolhouse.  There Dwight Estey, former WCT trustee and current president of the Wellfleet Historical Society and Museum, enlightened us on the early days of schooling when Wellfleet was still a part of Eastham.  Teachers boarded in revolving homes which also served as schools.  The fishermen’s schools met only during times when the boys were not called to sea.  Curriculum at the first schoolhouse was New Testament Bible and psalter only.

Chet Lay spoke again on the route of the Old King’s Highway when it was the main road traversing the town. It still exists disappearing and reemerging in its original location.  In Colonial times, the Old King’s Highway along the ocean side of East Harbor/Pilgrim Lake was also the only land route to Provincetown.  Chet reminded everyone that to see the original Wellfleet layout of the road, one would have to look in Eastham maps because Wellfleet was not incorporated as a separate town until 1763.

Everyone went back towards Wellfleet on the Old King’s Highway, crossing the intersection with Black Pond Rd. and passing over the Herring River stream. Just after the stream was the driveway into Peter Matson’s 1800’s house.  He and his friendly black Lab welcomed us in the front yard of his three-quarter Cape house, which his father had purchased in derelict state in the 1930’s for $400. By that time, it was one of the few remaining homesteads from the settlement that bordered the Herring River.  After the mouth of the river had been diked in 1909, the area had become undesirable with too many mosquitoes and the low water level.  He did recall that the Peters family’s cattle still came to graze in the fields that still existed before the trees took over the abandoned neighborhood.

The walk resumed going uphill on Old King’s Highway to the intersection of Old Hay Road. There we turned east back towards Gull Pond and eventually took a path that completed the loop and brought us right back to Gull Pond Landing where we began our trek three hours earlier. 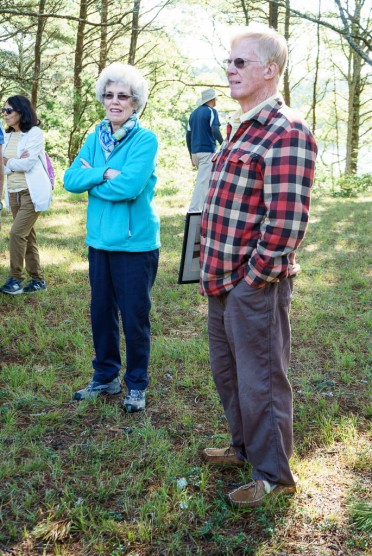 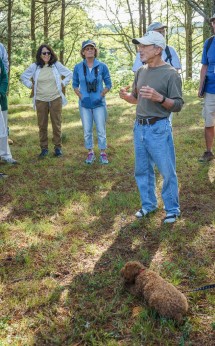 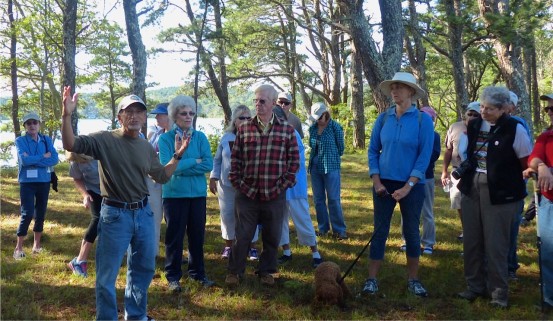 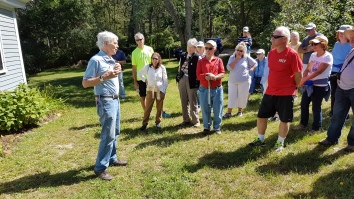 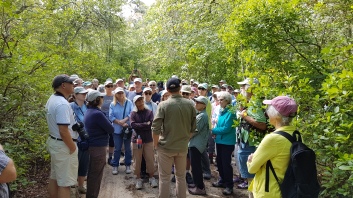 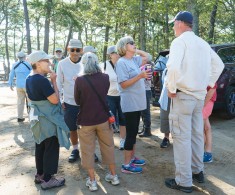 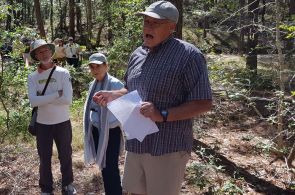 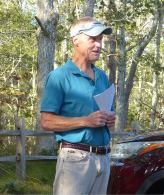 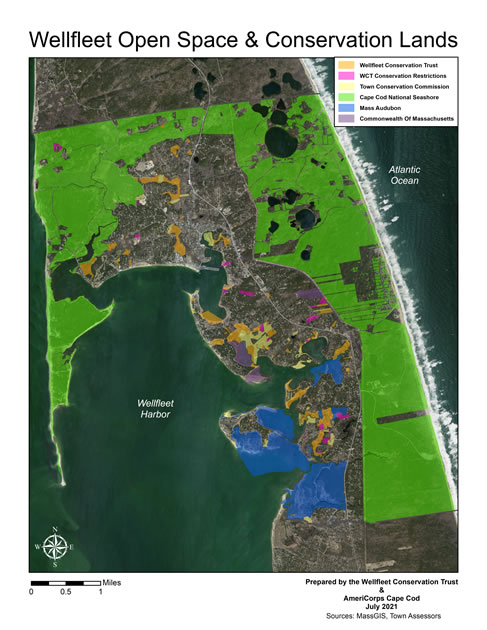